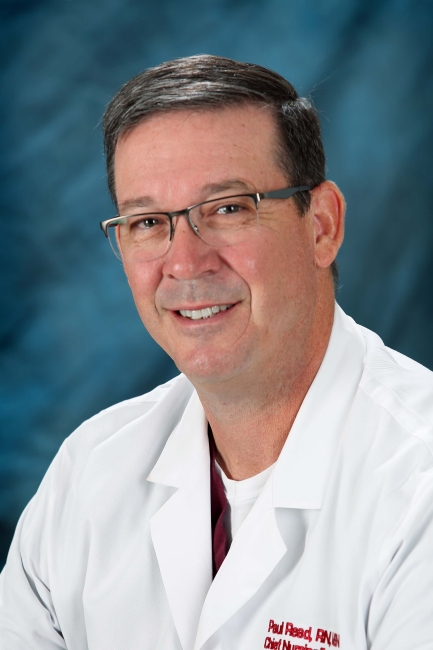 Mr. Paul Read is Chief Nursing Executive and Vice President at Springhill Medical Center, where he has been since graduating from the University of Mobile School of Nursing in 1998.

In 2002, he was asked to serve as the Chief Nursing Executive for Springhill, and he was charged with promoting nursing and improving quality of care hospital-wide. Mr. Read achieved this by serving as an example for all nurse managers. He “rolled up his sleeves” and pitched in whenever necessary. His actions demonstrated that outstanding nursing care starts at the top. He earned his Master of Science in Nursing Administration at the University of Mobile in 2005.

Mr. Read graduated from Leadership Mobile in 2005, and since then he has served as a panel speaker for discussions regarding healthcare issues in Mobile and Baldwin counties. In 2005, the University of South Alabama’s Sigma Theta Tau International Honor Society of Nursing, Zeta Gamma Chapter, awarded him their Excellence in Nursing Leadership Award. In 2007, Mr. Read was honored by the Alabama Hospital Association as a Healthcare Hero Award recipient. Most recently, he was recognized as a 2018 Alumni Star for University of Mobile. The Alumni Stars program was created to honor graduates while inspiring current students in their future career paths.

In addition to Mr. Read’s commitment to healthcare and his loyalty to Springhill, he also serves our country as a Naval Officer. Mr. Read enlisted in the Navy shortly after high school and served four years of active duty. Most recently, before retiring from the US Navy in June of 2014 at the rank of Commander, he served as the Executive Officer of a Forward Resuscitative Surgical Company supporting USMC Forces. Mr. Read believes that the military has been key to his successful civilian career, and he credits his success to either his military experience or training.