MONTGOMERY -- One of Mobile's most renowned anesthesiologists and pain specialists, Ralph Lee Irvin Jr., M.D., recently received the Medical Association of the State of Alabama's highest honor, the Samuel Buford Word Award, presented in recognition of service to humanity beyond the usual scope of medical practice and often rendered at some personal sacrifice. 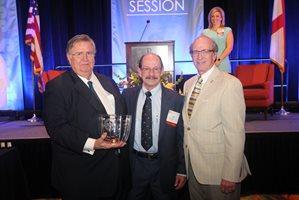 Immediate Past President Dr. Jerry Harrison, Dr. Lee Irvin, and Chairman of the Board of Censors Dr. Joey Falgout.

When the Medical Society of Mobile County began receiving calls in the hundreds from patients who were left in need after the closing of a pain clinic, Dr. Irvin was one of the first physicians to step in to assist. He did not shy away from what became more than an ordinary challenge. He not only cared for his own patients but also the influx of several hundred more pain-pump patients over the course of a year and a half while also working closely with the investigators with the Alabama Board of Medical Examiners to ensure the safety and health of the patients. His story was featured in April 2017 as part of the Medical Association's Physicians Giving Back online series detailing the inspiring stories of Alabama's physicians making a difference in their communities.

Dr. Irvin received his medical degree from the University of South Alabama College of Medicine in 1980. He completed his residency in anesthesiology with the Medical University of South Carolina in 1983 and served as Chief Resident. He has been in private practice in Mobile since 1983 and is board certified in anesthesiology and pain medicine. He is a member of the North American Neuromodulation Society, the American Society of Interventional Pain Physicians and the Society of Pain Practice Management. He is also a Diplomat with the American Board of Anesthesiology.

He has been a member of the Medical Society of Mobile County and the Medical Association of the State of Alabama since 1983.

SMC's Wilson recognized for 40 under 40 Award