Dicki Ward may not have known what to expect when he entered the Inpatient Rehabilitation Center (IRC) program at Springhill Medical Center, but he sure received the most optimal outcome anyone could ask for following a stroke! 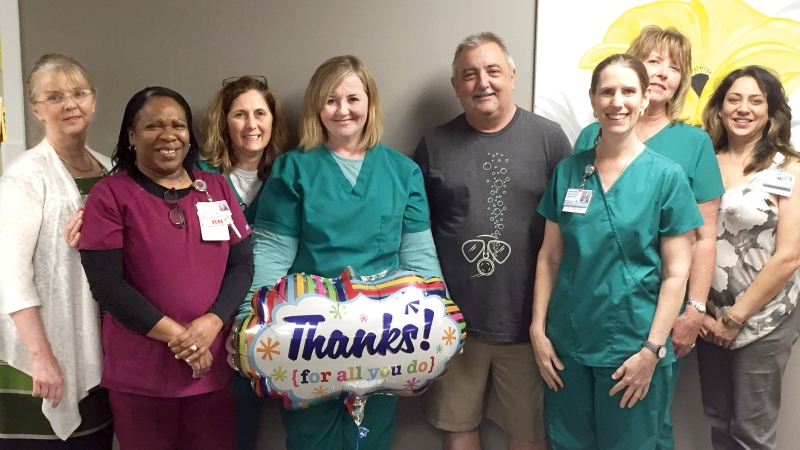 Admitted after a scuba diving incident that left him with the bends, an air embolism, and, ultimately a stroke, Mr. Ward was eventually transferred from the ICU. Because his injury resulted in some paralysis and weakness, as well as affecting brain function, a social worker determined he would definitely benefit from a stay at Springhill Medical Center’s acute rehab unit.

While in rehab, Mr. Ward received therapy to address difficulty in recalling events and assistance with daily living tasks and walking. He was also unable to climb stairs at the time. Occupational therapists worked with him so he would be able to bathe and dress himself. They also addressed safety awareness issues.

With assistance from physical therapy, Mr. Ward started walking at 50 feet on admission on a hemi walker and transitioned to a rolling walker to a straight cane and then on his own. Upon discharge he was walking more than 600 feet and able to manage stairs. His speech and swallowing also improved.

Nurses brought this all together following through with his exercises and monitoring his skin, nutrition, and hydration, as well as maintaining good pain management. Social workers worked with him and his wife to discharge him home.

“This truly was an interdisciplinary team working with the patient and his spouse during his stay to achieve the optimal outcomes,” said Stella Mason, MBA, MSN, RN, CRRN, who works on the Inpatient Rehab Unit at SMC. “We are extremely proud of our team of clinical liaisons, physicians nurses, PTs, OTs, speech therapists and social workers who work together to give the patients the greatest opportunity for recovery.”

Per the AHA/ASA Guidelines 2016: “Not going to an IRF (Inpatient Rehab) after a stroke is like trying to rebuild a house without a contractor.”

SMC expanded the Inpatient Rehabilitation Unit from 11 to 18 all private rooms, which now makes the hospital a 270-bed Rehab Expansion

Sounding the Alarm on CO Poisoning

The donation of several carbon monoxide alarms (CO) is leading to safer families for our area. SMC's Center for Wound Alarm saves lives

Meet 25-year-old Bailey: Springhill Medical Center employee and rehab miracle. Bailey’s story is one of a fighter and one that Celebrate Bailey's Recovery Success