Springhill's Center for Wound Care and Hyperbaric Medicine was chosen by The Jenkins Foundation as one of the 23 hyperbaric facilities across the U.S. to receive carbon monoxide (CO) alarms for their patients. 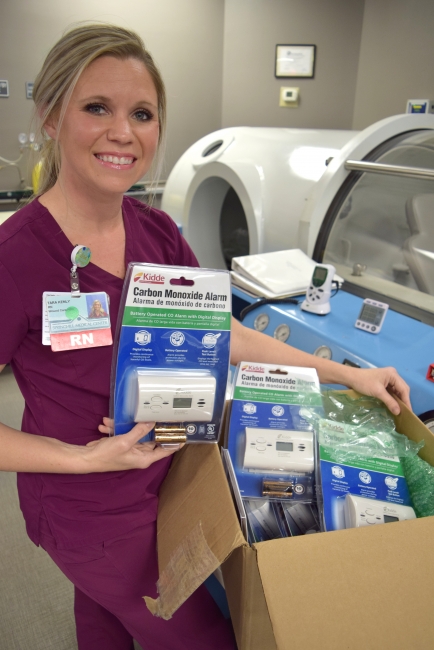 Springhill's Center for Wound Care and Hyperbaric Medicine was chosen by The Jenkins Foundation as one of the 23 hyperbaric facilities across the U.S. to receive carbon monoxide (CO) alarms for their patients. This effort is part of a pilot project aimed at protecting patients who have had emergency hyperbaric treatment for CO poisoning. They can take these alarms with them wherever they go.

The Jenkins Foundation was formed in memory of Daryl and Shirley Jenkins who both lost their lives to CO poisoning in a hotel room while on vacation. The Foundation is a 501(c)3 nonprofit CO awareness organization that coordinates both local and national CO awareness efforts to combine CO education with free alarms. Airy the Canary, their mascot, promotes CO alarm awareness in elementary schools. They also advocate for improved CO incident data collection efforts and federal requirements for CO detection in commercial buildings.

As the leader of hyperbaric medical services on the central Gulf Coast, Springhill's Center sees CO injuries from all over the tri-state area. Typical CO poisoning incidents in our area happen during the summer months and many because of wide-spread power outages during the hurricane season. Following Hurricane Katrina, a large number of patients were treated including a 28-day-old baby. These occurrences are small mass casualty events as families gather in houses with generators and air conditioners to escape the humidity and heat. Other patients used improperly maintained heating systems, had house fires, or were suicide attempts.

Garcia Selected for National Board